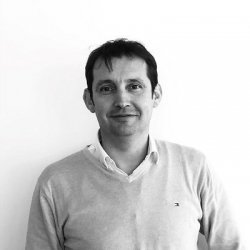 July 1999: Jean-François Cuzon wins the 470 World Championship in Melbourne, Australia. It is the beginning of recognition as an athlete. At the time, he has to compete at the top level in Olympic sailing while attending the INSA, in Rennes, where he majors in Electronic Engineering.

As soon as he graduates in 2001, Jean-François joins Michel Desjoyeaux’s team Mer Agitée. As the electronic engineer on board Trimaran Géant, he quickly becomes part of the crew during regattas and adds to its value as an athlete.

In 2005, Jean-François joins the French team Areva Challenge in Valence for the 32nd America’s Cup.

During the preparation of the monohull, he had integrated the team as System Engineer but soon after the first regattas in the Louis Vuitton Cup, he became the official navigator.

Those two years of work focussing on America’s Cup are of paramount importance: Jean-François has to combine top level navigation and cutting-edge engineering. In 2008, he launches his own company “Pixel sur Mer”!