Pixel is in the race 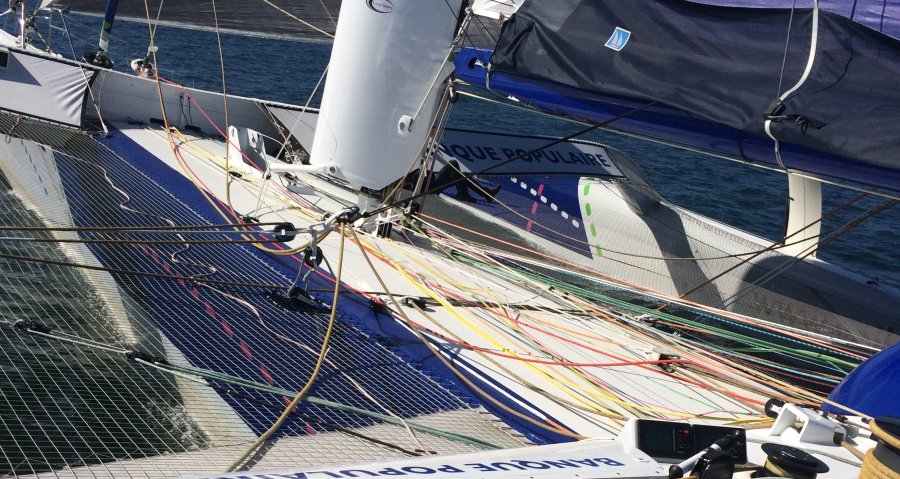 In 2014, PIXEL sur MER is committed to cutting edge engineering in the field of shipping and boating industry. But our team also remains committed to racing!

Overview of the sailboats PIXEL is monitoring:

6d 23h 42’ 18’’ ! It’s the new reference time for the Discovery Route (across the Atlantic from Cadiz to San Salvador). Armel Le Cléac’h, on board Maxi Trimaran Solo Banque Populaire VII, breaks his third record of the season after the Singlehanded 24 hour record (682 M) and the Marseille to Carthage Singlehanded record.

Jean-François joined the skipper and his crew to sail between Vilamoura (Portugal) and Lorient to check the electronics and to do a comprehensive study of the autopilot settings. Finetuning the Maxi Trimaran to maximize her performance is still on the agenda with an attempt to break the Transatlantic record (New York-Lizard Point).

Jean-François had a very good feeling from a technical as well as a sporting point of view: « Results confirm the research and development work done throughout the year for the multihull’s performance. It’s also a useful platform of instrumentation as far as the construction of the new Imoca Banque Populaire for the upcoming Vendée Globe is concerned ».

Tango is equipped for Maxi-Yacht regattas

The navigation system was changed (B&G’s WTP3 was installed).

Incorporation of an Access point to link the cockpit PC to a tablet and installation of a remote control software.

According to Pierre, Pixel’s technician, the Wally boat now enjoys a clear technological improvement: « switching from H2000 to WTP3 amounts to a leapfrog over 2 generations of navigation systems. The added tablet with wifi access is going to enable a better use of cockpit information during races. »

This coming season, Jean-François will serve as navigator on board Tango during the main regattas in the Mediterranean: "Giraglia Cup", "Voiles de Saint-Tropez" and above all, "Maxi Yacht Rolex Cup" held in Porto Cervo – Sardinia, a demanding body of water. It is the annual meeting where engineers, architects and navigators race these powerful 80 to 130-foot yachts.

Imocas are gearing up for the Route du Rhum

After a lively Transat Jacques Vabre the fleet of Imocas is already setting their sight on the Route du Rhum in late November, an event which, along with Vendée globe, gets the most media coverage in France. Our company helps several offshore racing teams. Our program: optimization of the electronic navigation equipment, installation of inertial systems, performance analysis…

After his past successes – both as #1 on MOD 70 Race for Water and as skipper on M34 CER (Tour de France à la voile) – this year, Loïc Forestier is in charge of D35 Veltigroup. PIXEL sur MER traveled to Lake Geneva to set the electronic systems on the catamaran with the first part of the Vulcain Trophy in mind, on May 9, 2014.

Ever since their first collaboration on Défi français Areva Challenge (32nd America’s Cup, 2007 in Valencia), Jean Galfione and Jean-François have kept in touch. Team Serenis Consulting’s new skipper sought PIXEL’s expertise for the maintenance and calibration of the electronic equipment on board Talanta, his Class 40. The first official presentation is planned for the Grand Prix Guyader in Douarnenez, next May, then Mondial Class 40… and Route du Rhum.

The beginning of the year has been multi-leveled for PIXEL sur MER! Until new classes of yachts and upcoming sporting events…

Transat Jacques Vabre 2013: the entire team is on deck